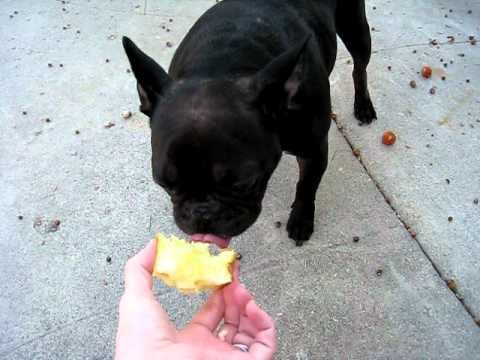 Can a French bulldog eat apples?

An apple a day keeps the doctor away, a commonly used saying, but is this really true? An apple is incredibly healthy for a human, but is this also the case for your French bulldog? Can a French bulldog eat an apple? Imagine your Frenchie has taken an apple from the fruit bowl and eats it, what can happen? For a French bulldog, an apple is not dangerous and he probably even finds it incredibly tasty (I know mine does), the big danger lies in the core of the apple which contains seeds. These seeds contain amygdalin, which breaks down into cyanide, that can be dangerous or even deadly for your Frenchie.

What is an apple?

An apple is a fruit that grows on a tree, (and witches can use them to put you into an eternal sleep 😆). You can eat an apple with or without its peel, but the core that is inside is not consumable. An apple grows on the branches of an apple tree and is available in many varieties; sweet, sour, bitter. Apples are a popular fruit because you can use them for many dishes, in addition to making a nice fresh salad, you can also make an apple pie.

Nutrients from an apple Is an apple dangerous for a French Bulldog?

If you want to feed your Frenchie an apple that’s no problem, but please make sure you cut the apple into small pieces without leaving a trace of seeds in it. The seeds in the apple core are very harmful to your dog.

Insurance for your dog

It can always go wrong .. the costs for pumping out the dog’s stomach (or worse ..) are sky-high. In almost all cases it is a lot cheaper to give the dog at least a cheap basic insurance. Compare the list with cheap dog insurance where you can insure your French Bulldog the best and the cheapest possible. 👇👇

>>Click Here To Get A FREE Quote Today And Make Sure Your Frenchie Can Live The Happiest And Healthiest Life Possible!<<

Do you have to go to a vet?

After eating and biting apple seeds, your Frenchie may suffer from the poisonous acid that turns into cyanide in his stomach, that the seeds contain. The oxygen intake in the organs is reduced. Especially the dog’s brain and heart are sensitive to this. Your dog may feel tired and may become nauseous and vomiting. Your Frenchie can also look drunk because he is dizzy. Shortness of breath can also be a consequence of the poison in apple seeds. It is certainly wise in this case to inform a veterinarian.

So the answer to the question ‘can a French bulldog eat apples?’ is YES, the only thing to avoid is the seeds.