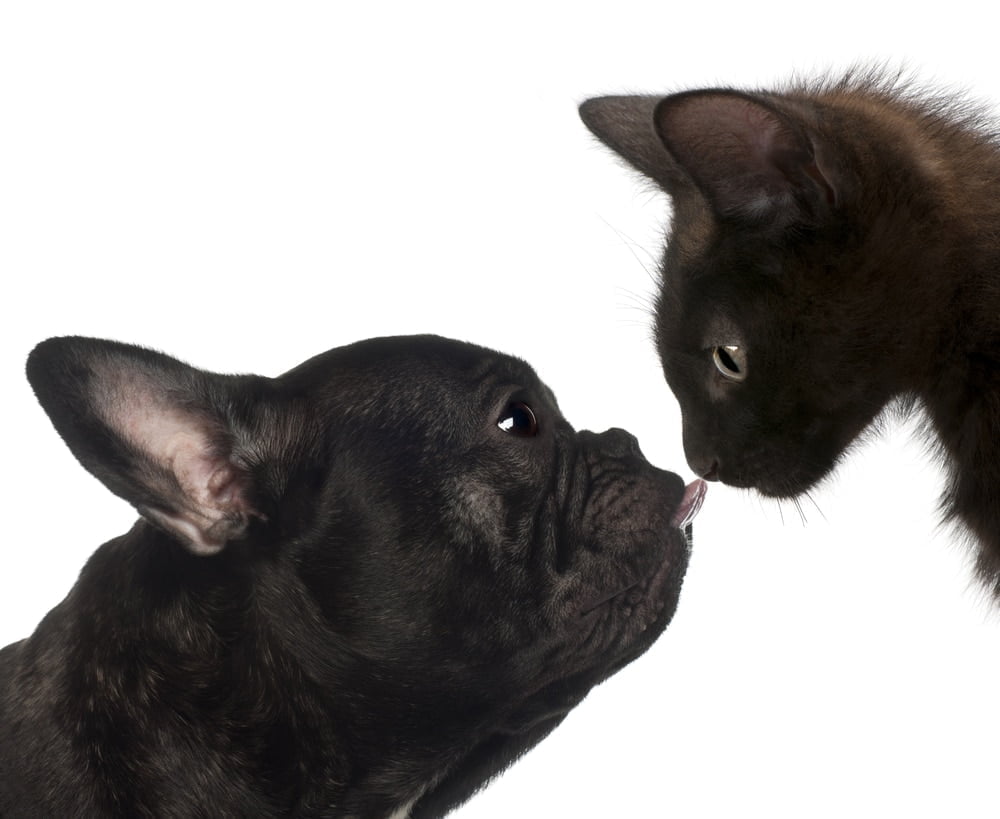 Maybe you already have your cat or Frenchie and want to add the other as a new family member. Or maybe you have a kitten friend you’d like your dog to be able to be around. There are steps to follow when introducing your dog to a new cat that will set everyone up for success. You will read more about helping your Frenchie and new cat live together peacefully but some tips can apply to a cat friend that does not live with you.

While Frenchies can usually meet and get along with new dogs pretty well, this can be trickier with a cat. While the new encounter will likely be mostly smooth sailing, there’s always a possibility it just won’t work. Anything is worth a try, though!

The Condition to Introducing Your Dog to a New Cat

Dogs and cats are two different species and sometimes see each other as prey. With that said, dogs and cats truly do ‘fight like cats and dogs’ very often.

A basic, yet important, condition for dogs and cats intermingling is that neither of the two has had negative experiences with the other to date.

If a cat has been frightened by a particular dog before, it is highly unlikely that the cat has forgotten and will be able to exist comfortably around that dog. The same could be said vice versa.

Introducing your dog to a new cat and socializing the two pets at a very young age, ideally under several months old, is your best bet for the two getting along.

Why Cats and Dogs Don’t Get Along

Cats and dogs, as we know, are very different animals. They have completely different origins and languages. These facts result in cats and dogs to not click very well.

Cats descend from an ancient wildcat and are known to have domesticated themselves when farming began and cats stayed around for food. Food has always been a cat’s top priority.

Dogs descend from wolves who are social and loyal, which may be why dogs get along with people so well.

Cats and dogs have two totally different languages and, like with humans, don’t always get along because of this. Cats don’t wag their tail to show excitement; dogs do.

Cats greet each other by walking past and looking into the others’ eyes; dogs run around each other and wag their tail. Cats ‘purr’ to show contentedness; dogs hear this like a ‘growl.’ Cats ‘meow’ for almost all communication; dogs typically ‘wolf’ for negative communication only.

Because cats and dogs are so different, introducing a dog to a new cat can be difficult. This isn’t to say that they can’t eventually get along, though.

Preparing for the First introduction

Luckily for Frenchie owners, Frenchies are usually good at getting along with others by their affectionate nature. While Frenchies and cats have a good chance of living together in perfect harmony, there is some prep work you can do when you are going to introduce a cat to your Frenchie.

In order to succeed, you must prepare everything precisely for the first meeting.

There needs to be another person present in the initial phase. This means that one person will be in charge of the cat while you are in charge of your Frenchie.

It is important that you are able to be fully focused on the first meeting. Special events, such as visiting friends or a family reunion, should not take place at this time.

Not only can many people disturb this first introduction, but so can loud music or sounds from the television. Therefore, plan the meeting in a quiet space.

Choosing a New Cat to Meet my Frenchie

If you do not have a specific cat in mind to become your second pet, it is best to choose a cat that fits well with your current situation at home. You should account for the character of your Frenchie. While most of them are peaceful and calm, some can be a little more hyper or active.

For example, if you have an older French Bulldog at home, the new cat should be fairly quiet and not too wild. If you have a very lively French Bulldog (most puppies are hyperactive), the cat should also have a certain confidence to be able to arm itself against the temperament of your Frenchie.

This thought process for your new pet can also be applied if you already have a cat and are getting a new French Bulldog. (i.e. Maybe it’s best to not get a puppy if you have an old, grumpy cat.) The same goes for a Frenchie meeting a cat friend, not a new cat roommate.

Prepare Your Home for Introduction

When you know that you are getting a new pet (or a different animal is coming to visit), there are tips for preparing your home to ensure that introducing your cat to a new dog will go well.

After preparing your home and the pets, it’s time to meet. Introducing your dog to a new cat still takes some effort and time after the preparation.

There is a good chance that the dog and cat will not immediately hit it off given their nature. And, that’s okay. You are prepared and you know what to expect.

Make sure your Frenchie isn’t too hyper or hungry at the first meeting. Make sure it’s eaten and has had a short walk. With that said, make sure neither pets are hungry.

Make sure the space where pets are meeting is quiet and leash your Frenchie. Putting your dog on a leash is extremely important to avoid potentially dangerous situations with the two pets.

When you and your Frenchie are ready, allow the other person to bring the cat into the space. Allow the cat to decide how close it wants to come to the dog. In most cases, the cat usually first flees to a high and as far as possible ‘viewpoint’ from where they observe the situation and their ‘opponent’.

For almost all pets, a new roommate in their environment creates tension. Anxiety and nervousness generally prevail and is gradually replaced by a certain curiosity about the new housemate.

It is important that you radiate peace and serenity. If you are tense or nervous at the first meeting, you will probably also transfer this to both pets. Gently pet both animals and use a calm and quiet voice when speaking.

If the dog pulls on the leash frantically, try to make him calm by sitting down in front of him and blocking your dog’s view of the cat. You can ask your dog to also sit and only praise him if he manages to stay calm in the presence of the cat.

A treat helps as positive reinforcement. For this to work, they should only be rewarded if the dog or cat has behaved well.

No matter how well the meeting may be going, end it after a few minutes. This will ensure that there isn’t too much time for pets to get too overwhelmed.

Getting Used to Each Other

After the first introduction is over, practice is key!

Depending on how much anxiety the cat displays, you should limit the acquaintance in the first few days to a few minutes a day. In the remaining time, the animals can stay in separate rooms.

Initially, it is sufficient for both animals to have 1 or 2 meetings of five minutes a day each. After about two week, if you notice that the excitement is decreasing, you can extend the meeting time to 10 or 15 minutes. Do not force both animals and let them decide when they are ready for a longer time together in a room. As an owner, you know your pets best and you will be able to see when the curiosity of the new roommate is greater than the initial fear of each other.

Dogs and Cats Learn to Understand Each Other

After some time of sniffing and learning each others’ language and communication, introducing your dog to a new cat really begins. Only when the dog no longer sees the cat as prey or an intruder and the cat no longer sees the dog as a predator, are they really ready to hopefully interact on a friendly level or at least live peacefully together.

It will take time for them to get to know each other. A few months may pass before one of the two animals ‘breaks the ice’. While the time of the meetings can be extended over time, it is important that you offer the animals as much normality as possible.

Once the pets show a civil toleration of one another for a period of time, bring them in a space together more while you focus your attention on something other than the animals. Have your two pets together in a space while you cook, read, or chat on the phone. This you show your Frenchie and the cat that it is normal that they live together in the same house.

Leaving the Two Alone Together

Leaving your home while your Frenchie and cat fend for themselves together will take quite some time. This can take several months to a year.

Use your best judgment here. Be sure that they only react nicely to one another and that you have seen no harm done towards another for a very long time. Until you are completely comfortable leaving them alone together, keep them in separate spaces (i.e. two rooms that both close off from the other).

The Road to an Established Team

Introducing your cat to a new dog has likely taken some time. In order to successfully merge your French bulldog’s and new cat’s lives, you must have patience.

The goal is that your patience will pay off and your French bulldog and the new cat will be a successful team who lives together happily.