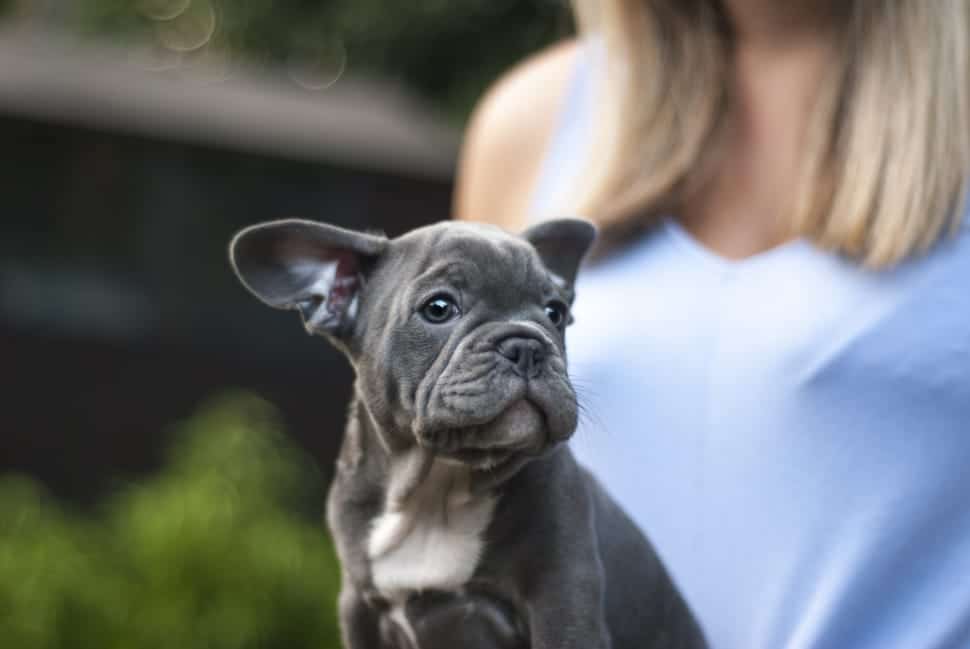 If we search for the best dog breeds and top pets to have, you can almost always bet French Bulldogs will make the list. In fact, if you continue reading here, you’ll learn more about where Frenchies have placed on best breeds lists. Their popularity can be attributed to their adorable, friendly, and pleasant features. But, what were French Bulldogs bred for? And were they always what we know them to be today?

The French Bulldog history dates back hundreds of years and, believe it or not, their ancestors weren’t what we know today’s adorable Frenchie to be: cute, small, and wrinkly companion dogs. French Bulldogs are one that has evolved a great deal over time.

Do you think of France when you hear ‘French Bulldog?’ If so, you probably aren’t alone. However, according to French Bulldog history, this breed originated in England in the late 18th century. During this time, English Bulldogs were mixed with smaller dogs to create a toy version of the Bulldog and this was where the wonderful Frenchie all began. The French Bulldog quickly became a popular lap-dog for English workers, especially lace-workers in Nottingham, England and would stick close by to keep them company.

During the Industrial Revolution when lace-makers’ shops started to close, workers began to immigrate to France for better job opportunities and their companion dogs joined them. Once the French started seeing this adorable and petite Bulldog, they grew to love them and breed more of them. This is when their appearance began to change more into what we see now in a French Bulldog: bat-like ears, large eyes, and a small nose.

It was in the 19th century that Americans began to travel to France when Frenchies started becoming popular in the U.S. Wealthy women visiting France fell in love with this enchanting little pup and the French Bulldog quickly developed a price tag of around $3,000. (If you want to know more about the cost of a Frenchies today, you can find all the info right here.) Eventually, French Bulldogs made their way to other countries and their popularity grew even more.

A Timeline of French Bulldog History and Locations

The French Bulldog we know today doesn’t quite resemble its ancestor from long ago. The English Bulldog of bygones was athletic and ready to brawl. We think of Frenchies as small and delightful these days. However, in the 1800s, English Bulldogs were bred for bull-baiting. This is where the name “bulldog” came from and still sticks even though bullfighting was banned many years ago.

When dogfighting was popular in the 1800s, English Bulldogs were bred to be low to the ground, have an underbite, and an unpleasant attitude. This large dog, about 80 pounds, was trained to take down a bull before the bull’s horn could get the dog first. They were champion fighters until The Cruelty to Animals Act of 1835 helped bring an end to the fighting.

Later on, French Bulldogs came to be as English Bulldogs were bred with smaller terriers and pugs. While this new breed was smaller than an English Bulldog, it still resembled it in many ways. The British people’s liking of this Bulldog grew less and less and the French started breeding more of this small Bulldog. This is when it started to look more and more like the French Bulldog we know today with a compact body and short, straight legs. At this time, all French Bulldogs did not have the noticeable underbite they have today and only some had the ‘bat-like’ ears.

Because of their calm and adoring demeanor, French Bulldogs were one of the first dogs people owned as companions and simply as a furry family member to love. Many other dogs in the 18th and 19th century were typically owned for hunting and protecting purposes.

After bull-baiting was outlawed and Frenchies were essentially ‘unemployed,’ they started to get their new distinct look. This is when they started becoming family pets and show dogs.

According to the French Bulldog Club of America show standards, Frenchies must have a large head, dark brown eyes, a flat skull, a thick neck, bat-like ears, a short and smooth coat, and a coat color of white, cream, fawn, or a combination of these. They can’t be over 28 pounds.

The Purpose of Showing French Bulldogs

While many people like to show French Bulldogs to flaunt their captivating look, the main purpose of showing dogs is to judge quality breeding in order to uphold the integrity of the breed. Show winners are considered the best dogs to breed.

For example, The French Bulldog Club of England also shows Frenchies and they look for healthy dogs. They are looking for health issues such as breathing difficulties, pinched nostrils, irregular bites, too short of a neck, screw tails or lack of a tail, and signs of dermatitis. If these issues are too prominent, it could affect the breed in the future.

All in all, Frenchies aren’t bred for showing. The idea is that they are shown to ensure breeding is done responsibly.

So, What Were French Bulldogs Bred For?

When we look at French Bulldog history and what these furry delights are popular for, we can certainly say that they are bred for companionship.

In the 19th century, French Bulldogs were a top pick in England for family pets. They kept lace-makers company for many years. Today, they serve the same purpose for many in The United States, The United Kingdom, Australia, and other places around the world.

French Bulldogs Are the Chosen Companion for Many Celebrities

That’s right! These celebrities love their Frenchies, too.

French Bulldogs may be quite simple to care for, but there’s a lot to this breed. They’ve been around for many years and have evolved to be the Frenchie many of us adore today. They’ve been present in places all over the world and have been and still are a cherished pet for many.

French Bulldog history may be complex and full of details but, we can conclude that there’s a very simple answer to the question: what were French Bulldogs bred for? Frenchies are on this Earth to be a loyal companion to all kinds of people all over the world!

For more information on this highly favorable pet, check out How to Choose the Best French Bulldog Rescue.