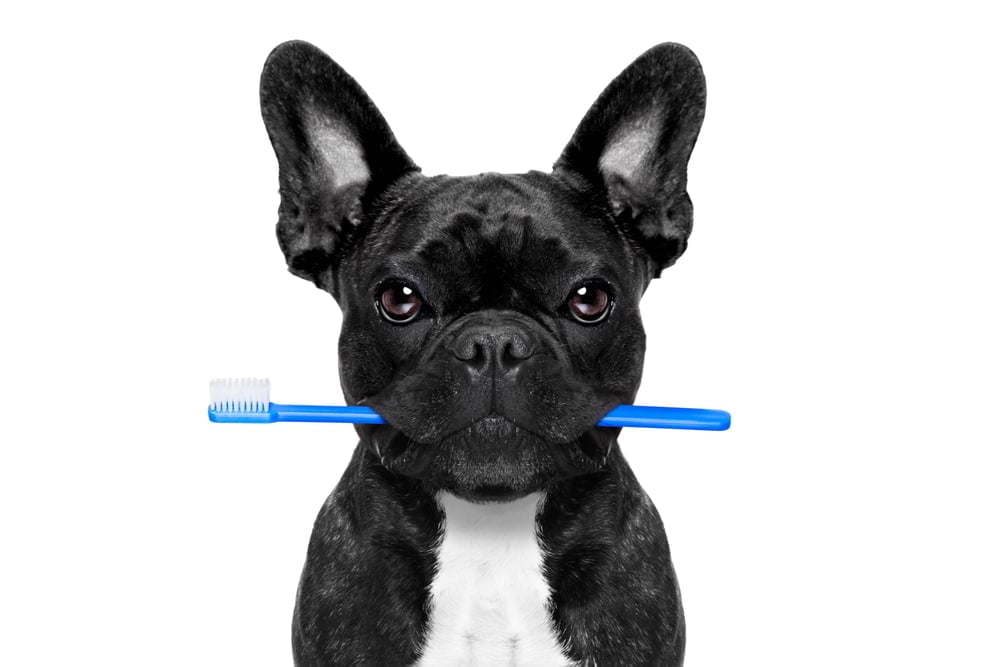 French Bulldogs are known for their smushed, adorable face. Along with their small face comes a small mouth. There’s lots to know when it comes to French Bulldog teeth including the stages of teething, potential oral issues, caring for teeth, and fun facts.

Just like babies, French Bulldog puppies experience teething. When becoming a new puppy parent, it’s good to know what to expect during the teething process. Here are the teething stages of a Frenchie puppy.

Since the breeder is the one who is with a pup this young because it’s still with its mother, you won’t be around for this part of the teething phase (unless, of course, you are the breeder). There are 28 baby teeth in total (front teeth or incisors, canine teeth, and pre-molars).

Fairly early on, French Bulldogs’ adult teeth start growing in and push out baby teeth. This is when you may start finding teeth and blood spots, a very normal part of teething.

Eventually, the 28 baby teeth will be replaced by 42 adult teeth.

Puppies teethe longer than some may realize. Their baby teeth grow in much quicker than their adult teeth. Their molars take especially long to fully grow in.

By around eight months old (sometimes sooner), French Bulldog teeth are all grown in and your pup should have 42 healthy, strong teeth.

Ways to Help Your Teething Puppy

It can be understandably frustrating when your new French Bulldog is teething and chewing everything in sight to relieve their discomfort. But, think of it this way: your new, cute pooch is probably in some pain and their teething phase thankfully won’t last. In the meantime, there are some things you can do to help the chewing and pain that teething brings.

Because French Bulldogs are a Brachycephalic breed and have small faces in addition to an underbite, they are prone to dental issues. All adult dogs have fourty-two teeth and being that Frenchies teeth must all fit into a fairly small mouth, you must keep an extra eye out on your pup’s dental care.

How to Care for French Bulldog Teeth

Many French Bulldog teeth issues can be prevented by following these simple steps:

Brushing your Frenchie’s teeth is the most important step for good dental health. While teeth brushing isn’t the most fun activity, it’s not such a daunting task if it’s done regularly. Vet’s Best Dog Toothbrush and Enzymatic Toothpaste Set | Teeth Cleaning and Fresh Breath Kit with Dental Care Guide | Vet Formulated
$10.69
Buy on Amazon
We earn a commission if you make a purchase, at no additional cost to you.

Turn it into a bonding time with your fur child and have treats ready. When it’s time for a teeth brushing session, sit your pup in your lap, let it lick a bit of the tooth paste off your finger, and start brushing once your dog seems comfortable.

*Special note: never use human toothpaste as it has ingredients that shouldn’t be ingested by dogs.

If a dog’s dental health becomes too bad, your vet may recommend a dental cleaning visit which consists of an exam, cleaning, and polishing. This usually isn’t necessary if your Frenchie’s oral care is kept up with.

A French Bulldog’s diet is important for many reasons including their dental health. Many believe that feeding your pooch dry dog food versus wet food is better for its teeth. This may or may not be true. However, feeding your dog fruits and vegetables for snacks can certainly be beneficial.

Avoid treats with fat, sugar, and grains and opt for things like apples, pumpkins, and carrots. Dog food that contains omega-3’s and no additives are good for dental health. If your pup is experiencing bad breath and plaque build up, there are kibbles specially for oral care. Textured chew toys and dental treats are specially made for dogs to gnaw on while plaque and tartar is rubbed away. Of course, less build up on teeth also means fresher breath.

As your pup drinks water, they are preventing yucky build up on their teeth. Encourage your dog to drink lots of water by keeping their water bowl clean, providing fresh water often, and providing praise and cuddles when it drinks water.

French Bulldog owners may worry about their pooch’s teeth given their small mouth and underbite. Carefully tending to your Frenchie’s teeth and realizing fun facts about their teeth can relieve this worry.

Like people, French Bulldog teeth serve different purposes for cutting and tearing food. Their incisors, which are at the front of their mouth, are for grooming and scraping. Their canine teeth, the long and pointy ones, are for biting down. Their canines are the ones that penetrate when they bite. Their premolars and molars are use for shearing and crushing and are using for heaving chewing.

Many people think it’s okay for their dog’s breath to be smelly. However, if a Frenchie’s mouth is properly cared for, their breath should have a neutral smell free from foul odors.

Dogs Have More Teeth Than Humans

As mentioned, French Bulldog puppies have 28 teeth that eventually all fall out. As adults, dogs have 42 teeth. Adult humans, on the other hand, only have 32 teeth.

Their Bite Force is Stronger Than a Person’s

While it’s difficult to measure exactly, it’s thought that dogs have a stronger bite force than people do.

Bacteria in a dog’s mouth versus a human’s mouth is different and because of this, there’s a high chance your French Bulldog will never get a cavity. Human teeth typically have bacteria that comes from sugars, but dogs don’t typically consume sugar. If a dog does get a cavity, it’s from eating sweet treats or table food.

Who knew there was so much to know about French Bulldog teeth?! But, now that you know, you can understand the teething phase, be cautious of possible dental problems, and carefully care for your Frenchie’s mouth to keep its teeth healthy and shiny.