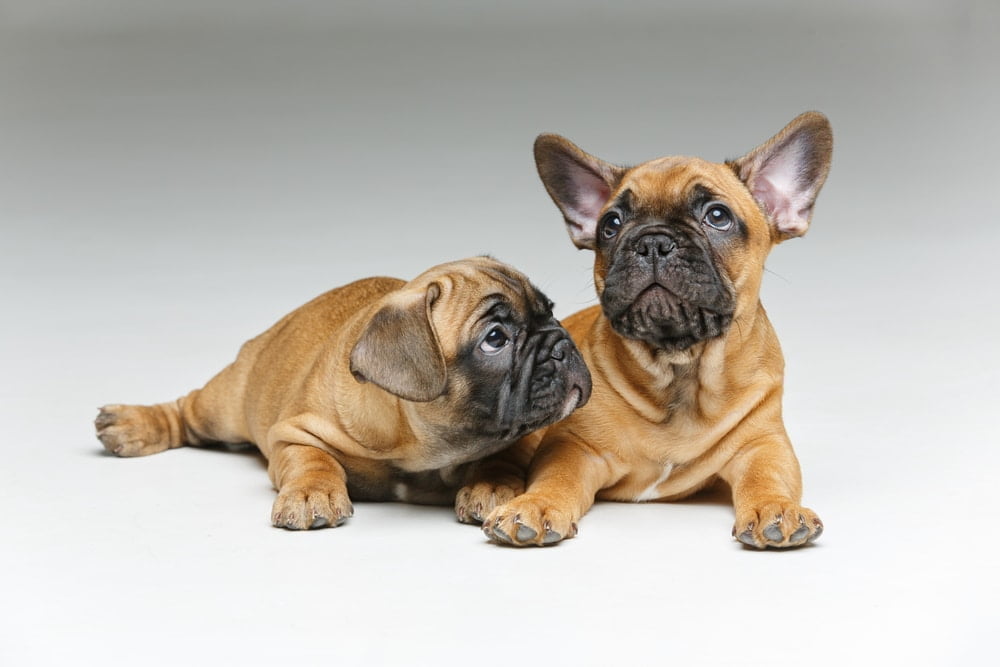 When getting a new puppy, one of the top questions is how big will my dog get? In this article, you’ll get the full scoop on a Frenchie’s size, including a French Bulldog growth chart for weight and height, information on the average weight and height of a full-grown Frenchie, and answers to all of your questions about your puppy’s growth process.

French Bulldogs are known to be small to medium-sized dogs. Of course, their weight can vary depending on their parents, but overall, Frenchies will grow at around the same rate unless it’s a mini French Bulldog or a mixed breed like the Frenchton.

Weight also depends upon gender. Males typically weigh more than females. Keep in mind that the French Bulldog Growth chart is simply a guide and that your specific Frenchie may be at the lower or higher end, somewhere in the middle, or even below and above the range.

As you can see, a French Bulldog’s growth slows down after about the age of six and a half months. Usually, a Frenchie will stop growing at about a year old or a little sooner or later.

*Special tip for weighing your French Bulldog: Since your Frenchie is a small dog, you can easily weigh it at home on a scale you would use instead of waiting for a vet visit. If your pup won’t stand on the scale, weigh yourself, then weigh yourself while holding your dog and calculate the difference.

As you will see in the French Bulldog growth chart below, Frenchies don’t get too tall. They barely double in height from the time they are 3 months old to 1 year. All puppies grow at various rates, but here’s the typical growth of a Frenchie puppy when it comes to height.

A dog’s height is measured from the ground up to the highest point of their shoulder blades.

French Bulldogs are usually at their full height when they are about 9 to 12 months old.

Even though a female French Bulldog typically weighs less than a male because females have smaller heads and less muscle, they’re usually around the same height.

On average, a full-bred adult French Bulldog weighs between 18 and 28 pounds and is 11 to 12 inches tall. Again, this can vary, and all pups grow at different rates.

Everything you need to know about French Bulldog weight can be read here.

The French Bulldog growth chart gives information on the growth rate, but here are some answers to common questions regarding a French Bulldog’s size.

Can I predict the size that my French Bulldog puppy will be?

You can use the ‘four fold’ and ‘double up’ formulas to get a good idea of what your pup will weigh once full-grown.

To determine what your pup’s height will be once they are full-grown, you can double what their height is at 16 weeks or 4 months to get a good idea. You can also compare your pup to the height of their mother (for females) or their father (for males).

What affects my Frenchie’s size?

As mentioned, genetics play a major role in the size of a puppy.

If you ask your breeder plenty of questions like how big the parents are, where the pup you’re interested in ranges in the size of the other puppies, if it’s the runt, etc., you should be able to get a good idea of if it will follow the appropriate weight gain provided in the French Bulldog growth chart. A high-quality breeder will happily answer questions. A responsible breeder also ensures that the mother is provided with top-notch nutrition before breeding. If this isn’t the case, her puppies will likely be underweight.

If you decide to rescue a Frenchie, you may not be able to get very much information regarding the puppy’s genetics.

Like with plants and babies, puppies need proper nutrition in order to grow. Too much or little food makes a difference in a dog’s weight. If you feel you are providing an appropriate diet, but your puppy’s weight seems quite off from the chart, consult your vet.

Keep in mind some dogs show less interest in food and may not finish their entire bowls at meal times. Vets tend to recommend giving your dog a certain amount of time to eat. After a certain amount of time is up, you pick up the bowl with the remaining food. This is to train your dog that they need to eat all of their food at one time, or they will have to wait until the next scheduled meal time.

Check out this complete guide to French Bulldog food.

It’s a given that exercise and weight go hand in hand. The good news is that French Bulldogs are known to be laid-back dogs who don’t require much exercise, but they do need to move just a bit in order to stay healthy. While long walks aren’t recommended for French Bulldogs due to a common breathing problem in Frenchies, playtime is an excellent alternative to provide your pup with ample exercise and time to bond with you.

If a French Bulldog is under stress or suffers from anxiety, it may show a loss of appetite. If you notice your pup being uninterested in meal times, try changing up its food. If this doesn’t work, consult your vet.

If your Frenchie isn’t able to move around like normal due to a physical issue, you may notice some weight loss or inability to gain weight.

When is a French Bulldog full grown?

As seen in the French Bulldog growth chart, a Frenchie’s growth slows down at about 6 months old. However, they will still put on some weight until they’re full-grown at about 9 – 15 months. They are as tall as they’re going to get at about 9 – 12 months old.

Is my French Bulldog overweight?

You can determine if your French Bulldog is overweight by noticing the following:

Of course, getting a second opinion from your vet is the best way to determine if your French Bulldog is overweight.

Can I help my French Bulldog lose weight?

Providing your pup with regular exercise and a balanced diet that includes protein, fat, fiber, and water and following the serving size provided on the nutrition facts is the best way to ensure your Frenchie is at a healthy weight.

Wholesome food made with natural, high-quality ingredients like this can help your pup maintain a healthy weight.

Don’t forget to follow the 10% rule when it comes to giving your fur baby treats. Treats should only account for 10% of your Frenchie’s daily calories. Less active dogs, like French Bulldogs, should eat about 25 calories per pound a day. So, if your pup is 20 pounds and eating about 500 calories daily, its daily treats should consist of about 50 calories. Apple slices and carrots are nutritious, tasty treats.

Is my French Bulldog underweight?

If a dog isn’t eating enough of a nutritious diet, it may begin to lose hair, show changes in feces, and lack energy. While you should be able to feel your Frenchie’s ribs, you should not be able to see them. If there’s no fat covering the ribs and they’re visible to the eye, your dog may be underweight.

Can I help my French Bulldog gain weight?

As much as we want our fur children to grow up and be healthy, it’s important not to overfeed. When a pup gains too much fat instead of healthy fats combined with muscle, it can face health issues such as joint, heart, and lung problems.

If your pup seems to be underweight according to the French Bulldog growth chart or it looks malnourished, certainly contact your vet. If it’s not interested in eating, it could be because of several reasons, such as anxiety, unappealing food, or dental issues.

The French Bulldog growth chart is a resourceful guide to follow when it comes to your pup’s growth process, but don’t be alarmed if your Frenchie doesn’t follow it exactly. Depending on the factors mentioned (genetics, diet, exercise, and health), a particular breed’s size will vary and can’t always be precisely predicted.

Regardless of the exact size of your adorable French Bulldog, they’re all small in size and big in personality!