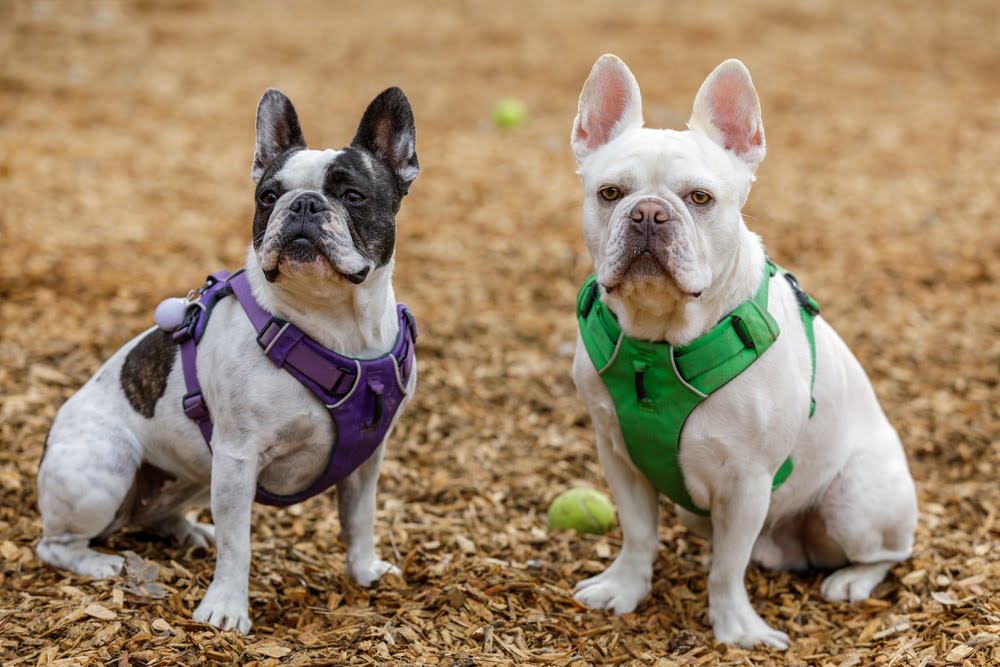 French Bulldogs are adorable, charming, and easy to get along with. It’s no wonder the American Kennel Club (AKC) named Frenchies the 4th most popular dog of 2020 in the United States!

Do you know what can be even cuter than your standard Frenchie? A French Bulldog mix! There are several mixes to choose from like a Frug (Pug & French Bulldog) and so many more.

What Breeds Can a French Bulldog be Mixed With?

French Bulldogs are small in size, with an average weight of 18-28 pounds, so they are commonly crossed with similar-sized terriers. A responsible breeder should be wary of escaping health issues with the other breed since standard Frenchies are prone to quite a few health problems.

While a French Bulldog mix is not approved by the AKC, there’s a good chance your family will approve of a delightful mixed pooch.

Check out this list of 13 French Bulldog mixes to decide which one is best for you and your family!

These two breeds look quite different, but this French Bulldog mix is quite enchanting! A French Bullhuahua may have a smaller skull and ears than a full-bred French Bulldog. They are loyal like a Frenchie, but need a little more playtime.

Both breeds might be small, but they are full of personality. A Frug has a fun personality and loves human interactions. Since both breeds have a flat skull, they face the risk of having Brachycephalic Syndrome, which can affect their breathing. Because of this, short walks in cool and shady weather is best.

Since both of these dogs have similar physical traits, a French Pitbulldog will likely have a compact body shape, a large head, and a short coat. We know a Frenchie is full of love, playful, and a little stubborn.

A Pitbull is known to be more aggressive, but it is believed that today’s Pitbulls are not typically bred for their ability to fight like they used to be. They are now usually bred for companionship and have just as much love to give as other dogs. As with any dog, early social interactions is key to raise a friendly dog who can play with other dogs and get along with people.

Since these two breeds have similar features and temperaments, mixing the two makes for a small admirable furry family member. This mix is usually compact in size with ears that stand tall.

The most important thing to know about a French Pomerdog is that they thrive most off human interaction. While both breeds are dogs who don’t require a lot of exercise, they do require attention. A French Pomerdog is most happy to be part of a family that has someone who’s often at home.

As with all dogs, it’s crucial to properly train and socialize your French Bullweiler since this mixed breed can be overprotective and territorial. Since both breeds are companion dogs, they don’t like to be left alone often and love quality time with their owner.

A Frenchton is a French Bulldog mix popular for its little size and big, loving personality. A Boston Terrier and French Bulldog are pretty similar in physical and character traits and together make a little, stocky pooch with short and smooth hair.

A positive feature of the Frenchton is a bigger skull than a purebred Frenchie. If a Frenchton has the trait of a larger snout, they will have less breathing issues than many French Bulldogs do.

Typically, a Frengle will have floppy ears from the Beagle and a boxed head and short body from a French Bulldog. Since both breeds have short hair, a Frengle doesn’t shed too much. Both breeds are also even-tempered and easy to get along with. It looks like a Frenchie is an excellent, low-maintenance pet!

For a dog with a bit more energy than your standard Frenchie, a Froodle could be perfect. Poodles are playful, friendly, and have a longer muzzle than a French Bulldog meaning a Froodle may have fewer breathing issues than a purebred French Bulldog. A Froodle may or may not have a curly coat depending on which parent it represents more.

Now, this is an entertaining combo! A French Pin is mixed with a laid-back Frenchie and a feisty mini Pinscher. Because the Pinscher is active, a French Pin will require more exercise than a standard French Bulldog. You’re sure to have lots of fun with this adorable mix.

For those looking for a mini French Bulldog, a Frorkie may be your answer. A Yorkshire Terrier is the smallest toy breed and when it’s mixed with a French Bulldog, you get a tiny, delightful pup. It’s important to note that since both of these breeds are prone to health issues (such as hip problems), a Frorkie may come with lots of vet visits.

While Chow Chows aren’t the most popular dog these days, it was in the top ten breeds of the 1980s according to the AKC. Chow chows look fluffy like a teddy bear but are known to not show this in their personality. However, mixing it with a French Bulldog can result is a small dog that has a short nose, shaggy hair, and a friendly personality.

Last up on the list of mixes is the French Shepherd Dog. This French Bulldog mix has a strong, devoted, and playful personality. Since a German Shepherd is a large dog weighing in at about 50-90 pounds, a French Shepherd Dog’s size will likely be medium to large.

When it comes to selecting your perfect pup, there are a lot of factors to consider including the following:

The Frug, French Bulldog and Pug mix, requires very little activity while the French Bull-Aussie is the perfect pet for those who are looking for an exercise companion.

A Froodle, the French Bulldog mixed with a Poodle, will likely have fewer medical complications than many other Frenchie mixed breeds.

The Frengle, or Frenchie and Beagle mix, could be a more affordable option because the Beagle is known to be less expensive than many other small dogs.

When it’s time for you to begin your hunt for the perfect French Bulldog mix for you, it’s important to be mindful about selecting a breeder. Reputable breeders carefully select parents to produce offspring. The better the breeder, the better the dog you’re going to get.

Adopting your Frenchie mix from a rescue is always an option, too. Rescuing means you can save money and a sweet dog’s life. You just may not always know what you’re going to get.

Frenchies can be mixed with many different breeds. There’s never a sure way to know if a French Bulldog mix will show more traits of the Frenchie or the breed it’s mixed with until you meet and observe it.

It is often said that mixed-breed dogs are healthier than purebred dogs, so this is certainly a plus to adding a French Bulldog mix to your family. Not to mention, a Frenchie mixed with just about any pup will be adorable!