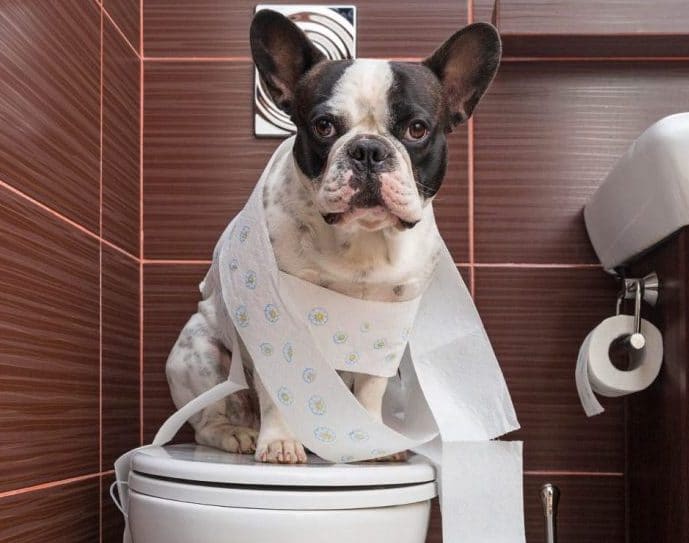 Dogs are naturally neat and do not like to foul their litter. As long as you give the puppy enough opportunities to do his needs outside of his nest, he will not foul his nest. You do have to get active to make your puppy clean. Your task in potty training is to prevent accidents by regularly letting the puppy out.

The basics for French Bulldog potty training starts in the nest. The mother dog keeps the nest environment clean for the first few weeks. As soon as the puppies are more independent, they increasingly seek out the outside of the nest to do their needs there. 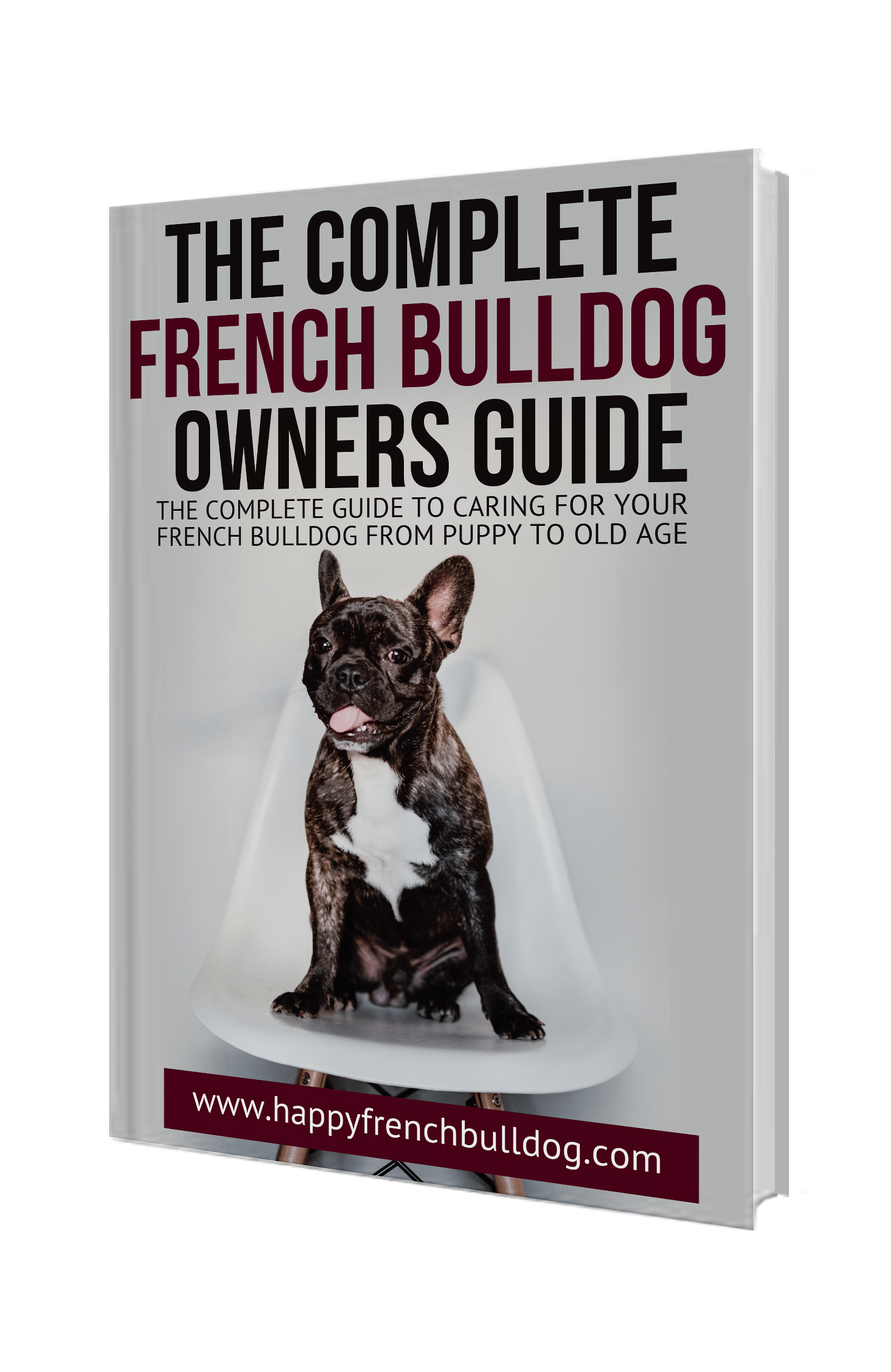 French Bulldog Puppies that grow up in too small a nest, develop this behavior much less strongly. Due to the lack of a remote corner to pee and poop, these puppies learn how to contaminate their own litter. These puppies are already behind when they leave the litter. It is therefore important to buy your French Bulldog from a good breeder, where the nesting site is large enough and cleaned regularly.

Your task in potty training is to prevent accidents. To do this, try to recognize patterns in the behavior of the puppy that precede peeing and pooping and let him out regularly.

What age should a French bulldog be potty trained?

The answer to that is immediate. From the very first day, you bring your cute little Frenchie puppy home is when you start with the potty training.

On the first day that your French Bulldog puppy is in your house, put some newspapers in different places. The most important place is at the front or back door.

Pay close attention when your puppy is going to pee or poop and how you can see this coming in advance. Often you can see this when he’s sniffing around for a long time or turning in circles at the same spot. Usually, the puppy will also do something if he has just slept well, eaten or played.

It is at precisely those times your puppy needs to do something, that you lure the puppy outside or lift it up and go outside with it. You then take him to a place that you later want him to pee or poop as he pleases and wait until he starts doing something. If you want the puppy to be able to do his needs later on command, you can now give a command (for example ‘make a pee’ or ‘do a poo’). Immediately after he peed or pooped he receives a reward.

In the beginning, even if the puppy is not getting ready to do anything, just often go with him to the place where he can do his needs. For example, every one to two hours. If you wait there for a moment until he has done something and reward him for it, he will be much quicker in recognizing that spot and will associate that spot (and peeing or pooping) to a pleasant experience and receiving a treat. Make sure that outside spot is not too far away. If you have a yard and do not want the dog to do his needs there, it is better not to do the potty training there. Then you shift the problem. If you don’t mind this, make a place in the yard where he can do it.

The trip outside is meant for his needs and not for playing. Sometimes puppies enjoy it so much outside that they play and enjoy all the new impressions, so they don’t have time to pee or poop. When you go back in, the puppy does its needs in your house instead of in the yard. Therefore, take the puppy back inside immediately after he has done his needs and do not play outside with him. A few times a day he can go some extra times to get rid of his energy, get to know the world and play with you, but don’t put him in the spot dedicated for him, so he doesn’t associate playing with his peeing spot.

Also, teach your Frenchie that there are several places where he can do his needs. Otherwise, you will get into trouble if you take the dog with you for a visit.

The following schedule can be used as a guideline for the number of times you have to go outside with your French Bulldog puppy. An 8-week old puppy pees when he is awake approximately every two hours and poops three to six times a day. As the puppy grows older, the time that he can hold his poop and pee increases. More important than following this schedule is that you look at your puppy and act on his behavior.

At times when you cannot pay attention to the puppy, such as at night or when you are away from home, the use of a crate is recommended as support for potty training. A crate must be so large that the dog can just stand, turn around and stretch out. If the crate is larger, it is advisable to reduce the size of the crate. You can reduce the surface of the crate by, for example, placing a piece of cardboard in it. The limited space in the crate stimulates the natural potty feel of your puppy. French Bulldogs and all dogs, in general, are hygienic by nature and do not like to soil their own nest. Because the puppy in the crate has no space to do his needs in a remote corner, he will keep his poop for as long as possible. Decreasing the crate surface, therefore, promotes potty training.

But before you lock your puppy in the crate, your puppy will first have to experience the crate as a safe and trusted place. You achieve this through crate training. Start with this as soon as possible and also take the time.

Get up a few times, especially during the first nights, to let the pup out for a short while. During the first nights at your home, your puppy cannot keep his pee up all night. And to make the puppy potty trained as quickly as possible, it’s up to you to prevent accidents. It is a good idea for the first few nights to take the puppy to your bedroom to sleep or to sleep in the living room with the puppy. This way you can keep a better eye on when the puppy needs to be taken out.

For example, get up at 4 o’clock on the first night and give your Frenchie puppy the opportunity to do what it needs to do. If your puppy is still calm and has not had a need to pee or poop, you can set the alarm the next day for half an hour later. You can keep this up until it is no longer necessary for the dog to pee at night.

As soon as your puppy goes to his crate during the day when he wants to go to sleep, you can leave it alone in the living room at night. It is also important that you start practicing that the puppy is in your house alone from the first day. If the puppy is house-trained at night (often around 12 weeks), you may consider not closing the crate at night or exchanging it for a dog bed.

When potty training your French Bulldog accidents are bound to happen in the beginning, it’s part of the game. If you see that your Frenchie is about to do his needs indoors, immediately lift him and bring him outside. A “pee brake” is triggered by lifting. If the puppy finishes his pee outside, you reward him for this.

If you are too late and the puppy has done all his needs, clean the area with hot water and neutralize the smell with, for example, vinegar. This removes residual odors and prevents the puppy from using that place, again and again, to ‘relieve pressure’. Don’t give the puppy any kind of attention to his accidents in your house.

Never punish your puppy for peeing at home. In the past, it was sometimes recommended that the pup was swept through the puddle or poo with his nose. It is now clear to most dog owners that this is counterproductive. Punishment for ‘uncleanness’ only causes the puppy to be frightened in your presence and he will do his need somewhere where you cannot see it. Like behind the couch or behind the curtain.

Even if puppies foul their own litter, it makes no sense to leave them in there for a few days. This way the puppy only learns that it is quite normal for him to sleep in an environment that he himself has soiled and it is becoming increasingly difficult to teach him this is not the correct way.

Ignore the accidents at home and praise your French Bulldog puppy when he is doing well. This way you achieve the desired result as quickly as possible.

Do you live in an apartment?

If you live in an apartment it may be wise to first make your puppy clean with newspapers. To do this, place newspapers in different places in your apartment. Now you put the puppy on the paper every time he gets ready to pee or poop or has eaten, slept or played. After a few days, your Frenchie will be newspaper-trained. Many breeders also aim to pass the puppies on to the new owner newspaper-trained.

Now you slowly reduce the number of newspapers until there are only newspapers at the front door. When you finally remove it, the puppy will walk to the front door every time he needs to do something. This way it becomes easy for you to pick him up and take him outside.

When greeting people or other dogs, your puppy can let some urine run. This is called a submissive pee and has nothing to do with uncleanness. Ignore the dog when he is submissive. Don’t pay any attention to him and certainly don’t punish him. If you pay attention to him your Frenchie puppy will behave even more submissively and this behavior will only get worse. If your French Bulldog acts submissive every time you return home, you can prevent this by ignoring your puppy completely when you return home. Ask your visitors to ignore your puppy on arrival. If he stays calm, they can greet him briefly after a few minutes without making eye contact. Most French Bulldogs grow over this behavior as they age.

How long to potty train a French bulldog?

To become potty trained, your French Bulldog must gain control of the circulatory muscles that close the bladder and anus. Gaining conscious control over these circular muscles is a growth process that occurs slowly. Some French Bulldog puppies are house trained a few days after they arrive home, but these are exceptions. Most French Bulldog puppies are completely house-trained at the age of 7-8 months. You yourself have an important influence on the time required to potty train your puppy. The more time you spend training your puppy, the faster he will be potty trained. If you encounter difficulties during potty training, consult your veterinarian to see if it might be caused by a physical problem.

Preventing accidents through a good schedule forms the basis of the French Bulldog potty training. A crate is an ideal tool for potty training. Try to prevent accidents. If the puppy does its needs inside the house, ignore this. Praise your Frenchie when it is doing well. This way you will achieve the desired result as quickly as possible; a clean French Bulldog puppy.