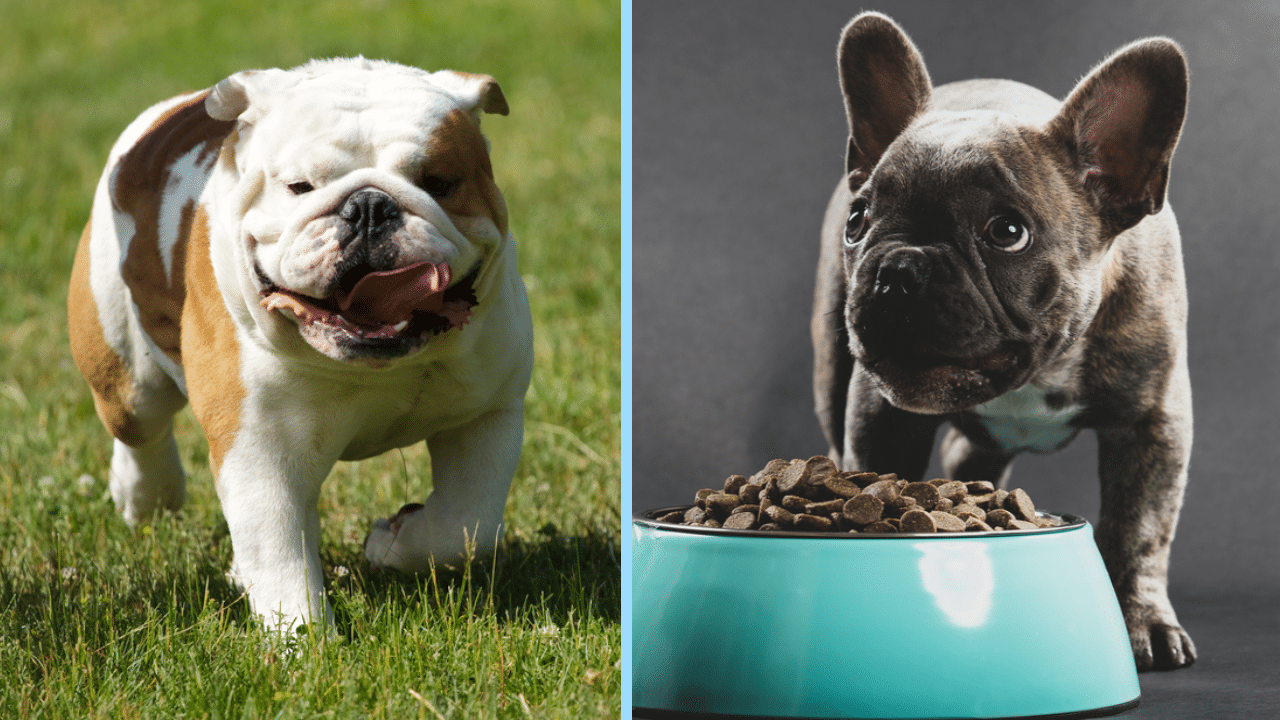 When it comes down to deciding on a French Bulldog vs. English Bulldog to add to your family, choosing which adorable breed is right for you can be a tough decision. Before deciding, it’s essential to know what these breeds have in common and how they differ.

While both of these dogs originated from England and are delightful pets, they are certainly not the same when it comes to their appearance, personality, health, and more.

While these two breeds show a big difference in size, other physical traits are alike from their short noses to boxy heads. One of these breeds does have more wrinkles than the other, believe it or not. Do you know which one it is?

Your average French Bulldog weight is 18 – 28 pounds while an average English Bulldog weighs in at 40 – 55 pounds. Their weight usually depends on their gender other factors like diet and exercise. Females typically weigh a little less.

With that said, if you’re looking for a smaller pup, a Frenchie is your best bet.

When it comes to the coat of a French Bulldog vs. English Bulldog, they can be quite similar. Their colors include white, cream, fawn, red, or a combination of these colors. They can also have patterns of these colors and/or black.

French Bulldogs can also be a rare color like blue or lilac. An English Bulldog can also be a unique color, but breeds of these colors are not approved by the American Kennel Club (AKC).

Not only can a Frenchie and English Bulldog have similar colors, but both of their coats are also short and smooth. Both of their coats can also shed. While they don’t shed a lot, their short hair can drop more than you’d think. Consistent hair brushing and fish oil can somewhat remedy this.

Another cute feature of these dogs is their wrinkles. The English Bulldog has more than a Frenchie, but they both have lots, which can cause health issues. Read more on this below.

Both a French Bulldog and an English Bulldog have short tails. Sometimes they have a corkscrew or curly tail. Their tail can also be straight.

While some believe their tails are docked, they aren’t. At one time, these dogs had longer tails, but they now have shorter tails due to a change in breeding over time. This change in their tail size is because their tails would get injured when they were used as show dogs.

The French Bulldog vs. English Bulldog note-worthy character is a top reason why these dogs are so loved. Both breeds are affectionate, loyal, and smart. Past that, they have some differences.

Frenchies are happy, sociable, and ready to cuddle or play. They can also be stubborn and independent.

English Bulldogs are typically more calm and serious than a French Bulldog. English Bulldogs do like to play but are more content lying around with their human. While they aren’t precisely lap dogs, they’re happy to lay on or near you to keep you company.

If you’re looking for a furry family member that doesn’t need a lot of exercise, you’re in luck because neither of these breeds do. In fact, the French Bulldog and English Bulldog are brachycephalic breeds, meaning that they can have trouble breathing due to their short-shaped face. They can also overheat, so it’s best if your short walk is during the cooler parts of the day and in shady areas.

You can read more about taking a Frenchie on walks here.

Of course, a dog maintains good health by having some physical exercise. You can provide a Frenchie and an English Bulldog adequate movement with a short walk each day, or every other day, and some chew toys to play with.

How to Care for a French Bulldog vs. English Bulldog

French Bulldog vs. English Bulldog level of care is pretty low-maintenance. As with any fur child, their health, grooming needs, training requirements, and preferred environment are all something to consider. These can vary for the two breeds.

While there are many upsides to having a French Bulldog or English Bulldog as a pet, the health problems the may face is not one of them. They are both prone to quite a few health issues due to the features most see as cute: a smushed face and small body.

There is a long list of French Bulldog’s health issues, as well as for English Bulldogs. Though these complications are due to genetics and can’t typically be cured, there are sometimes ways to help relieve them. Your vet can discuss the proper treatment further with you.

Here are the most common medical problems and how you can treat them.

If you notice that your pet shows symptoms of any issues, contact your vet for a proper diagnosis and treatment. Having pet insurance can provide you with peace of mind on the financial side if you face a situation where your dog needs medical care.

On the bright side of having one of these exceptional dogs as a pet, grooming them is relatively simple. They do shed some, as mentioned, but consistent hair brushing and a bath at least four times a year can relieve excess shedding. Since French Bulldogs and English Bulldogs don’t spend too much time outside, it isn’t necessary to bathe and clean them too often.

A French Bulldog is friendly and wants to please, but since they can be headstrong and independent, it can take some extra effort to train them to learn basic commands.

Since an English Bulldog is also ready to please and more diligent, it may be easier to train than a Frenchie.

Both dogs need encouragement, as dodo any dogs, so always provide positive reinforcement via treats and love when training your dog.

Another positive aspect of owning a French Bulldog or an English Bulldog is that they can live in just about any home. They don’t need a lot of space indoors or outdoors. This is also what makes them great apartment dogs.

Do keep in mind that since these dogs can easily overheat and don’t have a lot of fur for warmth, mild temperatures are best. If you live in a very hot or very cold place, this is something to consider.

What you will pay for a French Bulldog vs. English Bulldog varies, but the price range for both breeds is similar. For each dog, you are looking at paying about $2,000 – $4,000.

This is a wide price range that depends on the breeder. Reputable breeders who responsibly breed dogs to be as healthy as possible will charge more. If you find one of the dogs for well under $2,000, there’s a good chance that they have not been carefully bred.

If you choose to get your dog from a rescue, you can save some on these costs. Rescuing pets is noble because you’re saving a dog’s life, but be aware that it’s hard to be sure of their quality of health.

In addition to the price of the dog upon purchase, there are additional costs, including vet visits, food, beds, and other basics.

Here’s a difference for the French Bulldog vs. English Bulldog. A French Bulldog has a longer lifespan at 10-14 years, whereas an English Bulldog typically lives 8-10 years. While they are some of the best companions while they’re around, their various genetic health problems result in a shorter life than many other dogs.

Tips for an Increased Lifespan

Promoting good health for these breeds could increase their lifespan. The following pointers are suggestions for ensuring that your dog can live a healthy and happy life.

Choosing if French Bulldog vs. English Bulldog is the right pet for you can be difficult as they are both charming dogs with a lot to offer.

When deciding which is best for you, take note of their key similarities and differences. A Frenchie is a bit smaller than an English Bulldog, but both dogs have short hair and tails. They are both affectionate dogs who require little exercise. They both face several health issues. Both dogs are easy to groom, but a French Bulldog isn’t as easy to train as an English Bulldog. They can each live in big or small homes with or without a yard, as long as temperatures are mild. Both dogs are a bit pricey at $2,000 – $4,000. They both have a fairly short lifespan, but a Frenchie usually lives just a bit longer.

Either one that you choose is sure to love you their whole life and will make it easy for you to love them back!