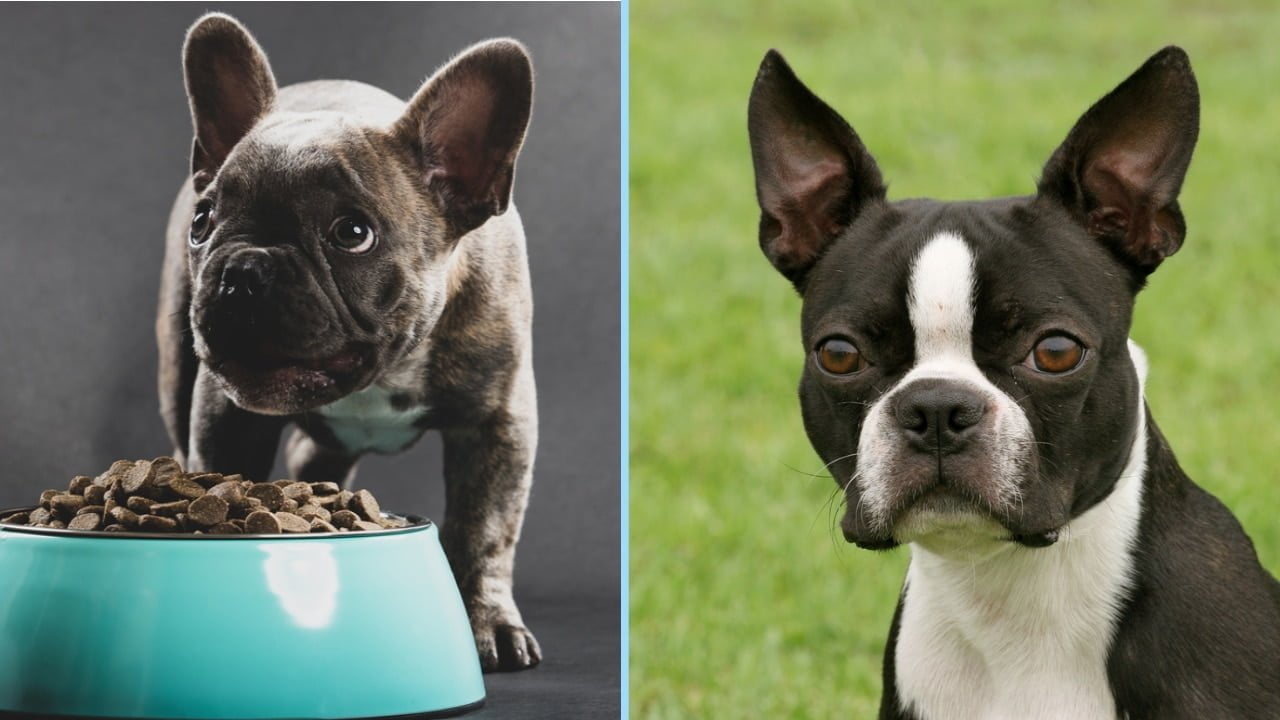 The French Bulldog vs Boston Terrier has a lot of similarities including their cute face and loving personality. This can make it difficult to choose which dog is right for you. While they’re both charming and similar in many ways, they also have some differences.

While both breeds descend from the English Bulldog, giving them similar features, they are certainly both unique in their own special ways. Knowing how these two dogs are similar and different can help you choose the perfect pup to take home.

It can be easy to confuse these two endearing breeds. Their appearances are similar in many ways with little tails, short hair, and flat faces. Diving deeper into their physical features can make it easier to tell the two apart.

A Frenchie is usually more muscular with a larger bone structure. A Boston Terrier often has longer legs of the 2 breeds.

A French Bulldog can be many colors, 16 to be exact. These colors are:

A Boston Terrier is often referred to as “the American Gentleman” because of a tuxedo appearance in coat color. But, they can also be a variety of other colors.

The French Bulldog tail is small. While many believe this could be due to being docked, that is not the case. A long time ago, they had longer tails but would often be injured during fighting. To avoid this, they are now bred to have shorter tails. They are also often twisted due to a deformity of the vertebrae.

A Boston Terrier often has a small tail. Their tail can be twisted, crooked, or stubbed depending on their breeding.

A top reason for these dogs’ popularity is their excellent personalities.

A French Bulldog has traits that make it a worthy dog for all: affectionate, laid back, sociable, and alert.

A Boston Terrier also has traits well worth a mention: lively, friendly, and intelligent.

While both dogs enjoy being social and getting attention, they don’t need much exercise. In fact, a small amount of exercise each day is ample as they often have Brachycephalic Syndrome making it difficult to breathe. They can also easily overheat.

A French Bulldog is mild-mannered and easy to get along with. The best way to keep a Frenchie busy and give them the attention they crave is by playing with toys indoors and cuddling on the couch.

A Boston Terrier is a moderate-energy dog that loves to cuddle. Their sometimes outgoing personality makes them quick and can sometimes seem like a high-energy level. Consistent exercise for a short time each day is enough for a Boston Terrier to be calm and ready to lounge around.

Caring for a French Bulldog vs Boston Terrier

The care of a French Bulldog vs Boston Terrier is similar in some ways and different in others. Overall, they are both fairly simple to care for but come with aspects to carefully consider before bringing your furry family member home.

Their health is certainly something to consider. Both breeds are prone to health issues.

A French Bulldog can face several health problems such as Patellar Luxations, a dislocation of the kneecap. They are also very prone to Intertrigo, an inflammation of the skin caused by rubbing skinfold which can cause infection.

A Boston Terrier often faces eye issues such as cataracts, glaucoma, and corneal ulcers due to their protruding eyes that are more vulnerable to eye injuries.

Both breeds often have Hemivertebrae, a congenital defect that causes abnormal vertebrae causing the spine to twist. Dogs with short faces like the French Bulldog and Boston Terrier are more prone to Hemivertebrae than other dogs.

While both dogs can face different medical problems, they are both likely to have one or a few. This is why having pet insurance is very important as it can provide financial relief when facing vet bills.

The grooming needs of a French Bulldog and Boston Terrier are quite similar. Both dogs have short hair, they don’t typically smell bad, and they shed very little. These attributes make them low-maintenance when it comes to grooming.

Regular hair bruising of these pups keep them clean and control any shedding that may occur. Bath time can be just four times a year unless extra playtime outside calls for an extra wash.

Training a French Bulldog vs a Bulldog Terrier is something that differs when it comes to these two pooches.

A French Bulldog is known to need training from the start and more authority to ensure success. Frenchies aim to please and are very capable of learning basic commands, but keep in mind that they may require persistence and patience. Positive reinforcement with pets and treats is key when it comes to training a French Bulldog. Sometimes hiring a professional dog trainer can also be beneficial.

To be honest, if you are someone who doesn’t have as much time or patience to train, a Boston Terrier may be your best bet. This does not mean that you won’t have to put in some effort to teach them how to behave, it just means that they are often faster learners. While a Boston Terrier can usually learn commands and other skills fairly fast, they do need to be socialized to learn to get along with other dogs.

Both dogs are small and can live in a place of about any size. This is why a French Bulldog is often known as the New York City pet.

Both dogs are great for small homes and homes without outdoor space. They need some exercise, but a short walk around the neighborhood and playtime indoors is all they need.

Boston Terriers enjoy running around outside, so if there’s no outdoor space at your home, a nearby park to occasionally visit may be appreciated by them.

Both breeds are known to be adaptable, so moving to a new space or leaving them with a dog sitter should not be too big of a challenge.

When it comes to climate, neither dog is a fan of very cold or very hot weather. Their short muzzle means that it can be easy to face breathing issues and overheat. Additionally, their short fur can mean that they can have trouble warming up when it’s cold. Keep these thoughts in mind when choosing one of these dogs or if moving somewhere new.

A Boston Terrier is usually around $900 but, again, this can vary depending on the exact breed.

If you choose to adopt a dog, you may save on these costs. However, if you do your research, you can be confident about getting a properly bred dog from a breeder.

Keep in mind that any dog you choose to get will come with extra costs such as regular vet visits, dog food, beds, and other basic needs.

If you choose to take one of the cuddly pups home, they will be around for about the same amount of time. This, of course, always varies.

Tips for a Longer Lifespan

Of course, we want our fur babies to be around forever. The good news is that there are tricks to foster a long, happy life for our lovely pets.

It’s no secret that a French Bulldog vs Boston Terrier as a pet is a tough decision. They are both great animals ready to cuddle a loving parent.

Keep the following in mind when making your decision.

Either one that you choose is surely going to bring joy to your life!