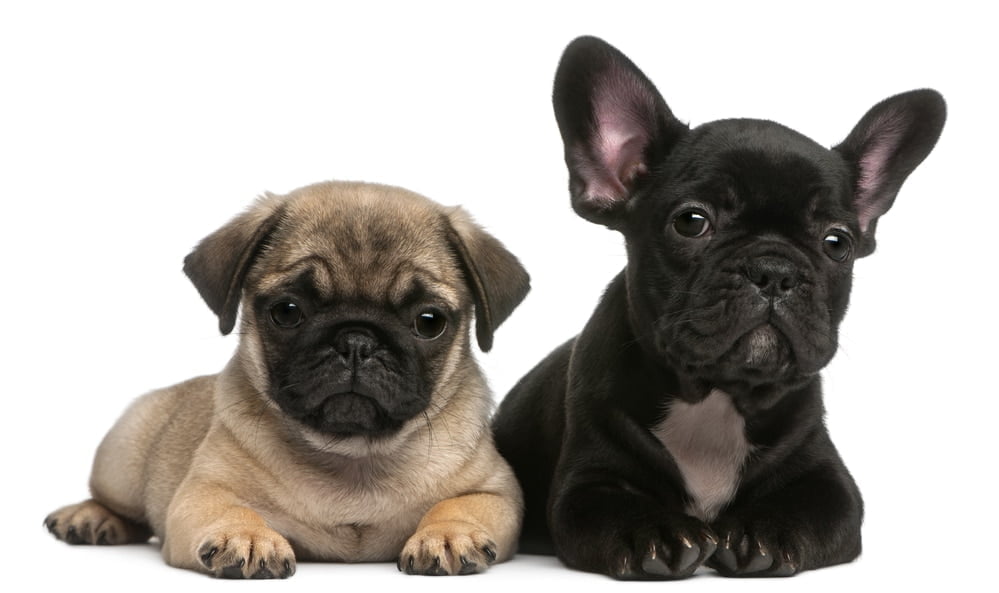 When you’ve got two adorable and delightful dogs to choose from as a furever family member, it can be a tough decision to make. One may argue that it’s a great decision to have to make.

The French Bulldog vs Pug has several similarities and differences when it comes to their traits, their health, properly caring for them, the best living space, their lifespan, and their cost.

Knowing what these comparisons are can help you decide which pup is the right fit for you and your family.

Believe it or not, even though French Bulldogs appeared in France many years ago, they originally came from England in the 1800s when they were bred to be a toy-size version of the Bulldog.

The pug is believed to have been a companion for the wealthy in China dating back to 400 B.C.

It’s no secret that both of these breeds have quite a charming appearance. While they share some physical traits, they’re also easy to distinguish between given some unique features.

Both the French Bulldog vs. Pug are considered a small breed. The French Bulldog has an average weight of 18 to 28 pounds, while a pug is usually a little smaller at 14 to 18 pounds. Of course, weight varies depending on several factors including diet and exercise. Male dogs also tend to way a little more.

*Special Tip: To avoid skin problems, such as Skin Fold Dermatitis, where the skin becomes inflamed from rubbing together, keep wrinkles clean and dry by using a pet grooming wipe. Pogi's Dog Grooming Wipes - 100 Dog Wipes for Cleaning and Deodorizing - Plant-Based, Hypoallergenic Pet Wipes for Dogs, Puppy Wipes - Quick Bath Dog Wipes for Paws, Butt, & Body - Fragrance ...
$12.99
Buy on Amazon
We earn a commission if you make a purchase, at no additional cost to you.

There are quite a few common French Bulldog colors:

Pugs usually have one of the following coat colors:

Pugs that aren’t black have black masks and ears.

French Bulldog tails are short and stubby. Many people think their tail is docked, but this actually isn’t the case. Once upon a time, the Frenchie had a long tail that would often be injured during fighting. Because of this, they started being bred to have shorter tails. Sometimes the French Bulldog tail is twisted because of a deformed vertebra.

Pug tails are just a bit longer and curled. The reason their tails are curled is because of a spinal deviation. This disparity has become a strong point when it comes to the look of a Pug as it is quite cute. There are times when a pug’s tail droops or becomes straight. This can happen for various reasons, but a vet can provide a proper diagnosis.

When it comes to the personality of these two breeds, there’s quite the competition. Both pups are social, affectionate, and loyal making them the best family pets and an even better snuggler. They both have so much love to give!

Some differences of the French Bulldog vs. Pug personality is that the Frenchie is more laid-back and may show alertness when need be, but a Pug is more active and alert. Because a Pug has a little more energy and awareness, it may bark more than the usually quiet Frenchie.

When making the decision to get a new fur baby, it should be considered that both the French Bulldog and Pug are prone to several medical problems.

Concerns for Both Breeds

Since the French Bulldog and Pug are similar in many ways, they share many common concerns.

Caring for Each Breed

One of the greatest things about these two breeds is that they’re laid back and fairly simple to care for. French Bulldog vs. Pug care also has some differences.

As we now know, both the Frenchie and Pug need their skin folds cleaned regularly to prevent infection.

When it comes to brushing, this should also be done often. A Pug sheds a bit more than a French Bulldog so more hair brushing sessions may be needed.

Since neither dog needs a whole lot of exercise and they enjoy relaxing indoors, they don’t get as dirty as some other breeds. Because of this, about four baths a year is plenty. Of course, if more is needed, that’s okay. Keep in mind that too many baths can result in dry skin.

For the full scoop on bathtime, check out this complete guide.

Because of the breathing issues that both breeds encounter, extensive exercise isn’t needed. They’re also both very calm dogs and don’t have a lot of energy to burn. A short walk or two a day is enough to maintain their health and weight.

Indoor playtime is the way to go for the French Bulldog and Pug especially with so many toy options.

When it comes to training a French Bulldog or a Pug, treats and patience are vital. Both dogs want to please their owner but can be stubborn. Many will say a French Bulldog is easier to train because a Pug is known to be more mischievous.

Being so small in size, whatever living space you have will more than likely work for either breed. As long as there’s room for a small bed and a few toys, you and your new pup are good to go.

When it comes to outdoor space, neither the French Bulldog nor the Pug needs a lot of it. However, it is important to note that both dogs prefer mild weather. A climate that is too hot doesn’t go well with the breathing issues both pups may experience and a climate that is too cold may make it difficult for these short-haired dogs to stay warm.

The average lifespan of a French Bulldog is 10 to 14 years and 12 to 15 years for a Pug. With that said, this can always vary depending on specific circumstances. Either way, both breeds are top-notch pets for as long as they are around.

Tips for a Long, Happy Life for Your Pup

As if the decision on a French Bulldog vs. Pug wasn’t hard enough, they have similar price tags. Both breeds can cost you up to about $2,500. Of course, you can find your new furry family member at a cheaper price but probably not for much less if it’s been bred responsibly.

If you choose to adopt, the cost is usually cheaper since spay, neuter, and vaccine costs are oftentimes covered. More on that here.

Once you bring your pup home, there will be extra costs including vet visits, food, beds, toys, and other basic needs.

*Special Tip: One sure way to relieve some financial responsibilities of having a pet is getting pet insurance to aid in medical expenses.

Now that you have a complete comparison of the French Bulldog vs Pug and are probably thinking they’d both make an exceptional pet, it’s time to make a decision.

Let’s summarize their similarities and differences:

The bottom line is that both of these enchanting pups are known to be excellent pets for most people and you can’t go wrong with either choice!